This dress is based on a colored copper engraving titled, “The Expulsion of the pastor George Mylius on 25 May 1584.” I made it for the Rapier and Costume Symposium in September 2013. 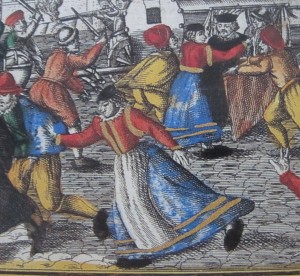 Both the dress and jacket are made from wool. The bodice of the dress is used in the same method as previously described in the 1520s Orange Ausburg Dress Diary. The skirt is only gathered at the waist because the store shorted me on fabric and I didn’t have enough information to make pleats.

The jacket is made from my bodice pattern modified a bit. The sleeve pattern is the same pattern as my dress sleeve, but with an extra 1/4 inch on each seam.

Because of the stretch, discussed below, the dress is pinned up all around the waist for the photos with the jacket.

I’m a big believer in making sure that the clothing can be used. In this case, the woman in the engraving is running. So…I tried running. It worked great. 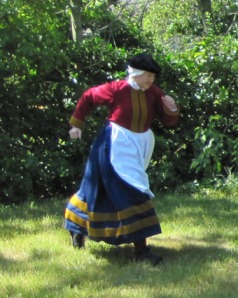 Everyone who wants to a reproduction of a garment wants to use wool. The downside is that modern wool is more cheaply made that the historic stuff. This wool is from Joann’s Fabric. It was too spongy. It stretched A Lot after I made the dress. I know wool stretches but this was out of the ordinary. I will be reluctant to use wool in the future unless it is very tightly woven. When I made the dress, the waistline was up above the bottom of the jacket. Now, as you can see, it is not.

These photos are the last photos of this dress. I will be taking it apart and re-used for another project. The jacket is also a bit large but it’s still usable, so I’ll keep that as is. 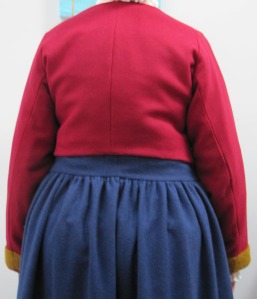